Located in the Himalayan Terai region, Cooch Behar is by far the largest town and also it is one of the prominent districts of West Bengal. Thousands of tourist visit the place every year specially for its unlimited attraction in terms of historical monuments, sizzling scenic beauty, traditional and ethnic culture. With a royal heritage and a glorified past it is one of the planned locations of North Bengal. The city has some of the magnificent creations and architectural brilliance which is a must see for every visitor. 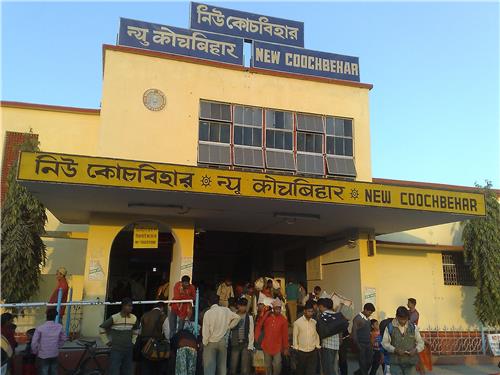 New Cooch Behar railway station
Apart from having tourist interest, the district also is considered as one of the most prospective locations in terms of business growth and development. However, to support all these interest from people, excellent communication is important and that is available in Cooch Behar. Almost all modes of transport are present in Cooch Behar be it by air, railways or by road and that is why it is well connected with all major places within the state and beyond.

Railways is one of the most preferred, comfortable yet cheap mode of travel to Cooch Behar. It is in fact the best option considering the frequency of trains and the less time taken for traveling. The main railway station of Cooch Behar is at a distance of 5km from the heart of the town and is named as New Cooch Behar Railway Station and the station code is NCB. There are various trains traveling through this station making it one of the most important station connecting various cities and district of North Bengal and north East India. It connects major places like Mumbai, Delhi, Chennai, Hyderabad, Guwahati etc.

Though Cooch Behar itself has an airport of its own but the same is not in operational condition. Though there are plans to start the same at the earliest but till date people have to depend on Bagdogra Airport near Siliguri to travel to Cooch Behar by air. At a distance of 160km from Cooch Behar, this airport has good connectivity with major destinations like Delhi, Mumbai, Guwahati and mostly with Kolkata which has both domestic and International terminals which connect almost all destinations within the country and even some in abroad. The major airlines operating in Bagdogra Airport are Air India, Go Air, Indigo, Spice Jet, Jet Airways and others. The distance from airport to Cooch Behar town can be traveled by private taxis available outside the airport premises.

North Bengal State Transport Corporation is the main bus service provider in entire Cooch Behar district apart from some private transport companies. Both private and NBSTC buses cover long and short distance within and beyond the district. The buses are usually available within Cooch Behar town from two major bus stoppages which include Central bus terminus and Birendra Chandra Dey sarkar Bus Terminus. The latter is more popular for long distance bus routes to Siliguri, Jaigaon and Dubri after every 10-30 minutes gap in various time slots in a day. From NBSTC bus terminus there are buses to Siliguri, Malda, Balurhat, Guwahati, Behrampore, Tejpur, Karimpur, Muzaffarpur, Ranaghat and Raigunj. The major bus type available here includes express, deluxe and rocket buses. The bus fares are fixed for every destination in NBSTC buses but eh same is different from private ones.

Cooch Behar is facilitated with excellent road conditions which enables car travel in its best form. If the choice of travel is personalized travel with superior comfort then the best mode of travel is through cars. The advantage of car travel is that one can enjoy the independence of own vehicle and can reach all those places where public transport are not accessible. There are various car rental agencies in Cooch Behar which provides rented cars of all kinds be it SUV or economical, luxurious or big end 65 seaters. One can choose the type of car required and submit necessary documents to avail the facility. The car rental companies are based in several localities of Cooch Behar and there is no standard fare for any destination. Car fares differ from one rental company to another and also it is dependent on the choice of car and services required. However bargaining is the best way to crack a good deal in this affair. It is also important to opt for a reputed car rental company to avoid any hassles or mishap of any kind. Some of the reputed car hire agencies in Cooch Behar district are mentioned below.

In a nutshell it may be stated that Cooch Behar is one of the easily communicated places of North Bengal facilitating the visitors as well as the inhabitants with all modes of travel. People in the city can fetch auto rickshaws or cycle rickshaws to move small distances which makes the whole traveling all the more convenient. However the administration realizes that there is still scope for improvement and focus is given on the same to make the city more tourism friendly.